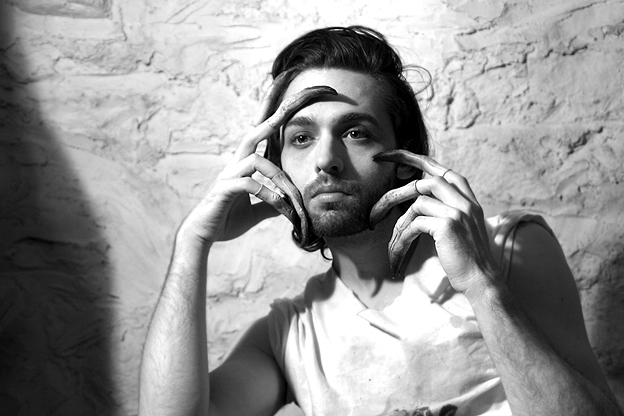 Andrew Jordan is a visual artist working in various media including sculpture, performance, fashion, costume design, and photography. He received his MFA with an emphasis in sculpture form the Cranbrook Academy of Art and his BFA in Fine Arts where he minored in Media Studies from the Columbus College of Art and Design. Andrew became interested in performance and costume at age 8 when he started dressing up his family and friends to make photographs and videos. Back then he pulled his "looks" from his parents' attic and his costume trunk where he kept his various hats, masks, capes, and dinosaur tails. His costume trunk has since grown into the entire basement of his Brooklyn studio. For as long as he can remember Andrew has been drawn to art and fashion that diverges into the realms of the eclectic, the weird, the beautiful, and the monstrous.

Now he experiments with the interplay between various art forms driven by his interest in the relationship of sculpture, installation, and puppetry to the movement of the human body. Focusing recently on scenic and costume design, Andrew has designed for various projects in theatre, dance, film, fashion, and performance art with critically acclaimed choreographers Christopher Williams, Glen Rumsey, Cori Olinghouse, and Polly Motley, designers David Quinn and Kristin Costa, and film-maker Mike Olenick. Currently, Andrew works with Izquierdo Studio, a costume-design and prop shop specializing in sculptural costume work, where he has completed projects for The Metropolitan Opera, Broadway, Marc Jacobs, Wes Craven, Madonna, Heidi Klum, Ralph Lauren, and Julie Taymor, among others. This past summer Andrew designed a course focusing on costume construction and wearable sculpture at the Ox-Bow School of Visual Art.